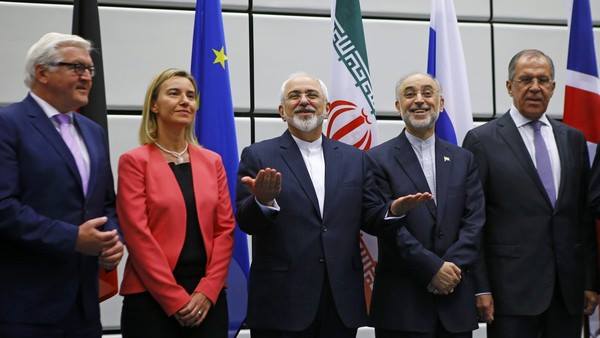 Six world powers and Iran have agreed a breakthrough deal to wind back the country’s progress towards building a nuclear bomb in exchange for a sweeping reversal of international economic sanctions, bringing to a close nearly a decade of isolation for the Islamic republic.

Details of the deal, including the crucial timing and scope of sanctions relief for Iran and the range of access international nuclear inspectors will be granted over Iran’s sensitive nuclear sites, are expected to be announced later on Tuesday.

Mohammad Javad Zarif, Iranian foreign minister, said at a formal announcement of the deal that it was a “historic moment” and a “win-win” solution. “We’re reaching an agreement that’s not perfect for anybody but what we could accomplish,” he said. “Today could have been the end of hope on this issue but today we are beginning a new chapter of hope.”

All parties then went into a final plenary meeting, after which a press conference will be held. US President Barack Obama is due to make a statement on the issue at 7am EST (12pm London time).

Speaking earlier outside the Palais Coburg, where the negotiations were held, Yukiya Amano, the head of the International Atomic Energy Agency, announced a comprehensive road map to resolve one of the thorniest issues in the talks: the so-called possible military dimensions (PMD).

Iran has long resisted demands to clarify questions raised by the IAEA about military research activity possibly linked to developing a nuclear weapon.

“I have just signed the road map between Iran and the IAEA for the clarification of past and present outstanding issues regarding Iran’s nuclear programme,” Mr Amano said. “[It] sets out a process to enable the agency, with the co-operation of Iran, to make an assessment relating to PMD by the end of 2015.”

The plan involves a “clear sequence of activities”, Mr Amano added, including technical expert meetings, clarification of outstanding questions and visits to sensitive sites including the military base at Parchin.

Capping two years of protracted, difficult negotiations, the deal will put in place hard limits on Tehran’s nuclear activities for the next decade and, within weeks, begin to reconnect the $400bn Iranian economy with the world.

It will be hailed by many as one of the most significant foreign policy successes of Mr Obama’s presidency and decried by others, including some of Washington’s closest Middle East allies, as one of its most egregious failures.

The deal brings to a close a three-week stretch of discussions between Iran and its interlocutors — the US, Russia, France, China, the UK and Germany — that have set precedents and broken records.

From the start, the talks have involved the highest-level diplomacy between Iran and the US since the overthrow of the Shah in 1979 and have demanded the highest level of commitment. No secretary of state has dedicated as much time to a single diplomatic objective as John Kerry.

Early reaction was negative in Israel, where the government has been the most vocal opponent of an agreement it says will cement Iran’s status as a nuclear threshold state and increase its financial means to pursue proxy wars around the Middle East.

Benjamin Netanyahu, prime minister, called the agreement “a historic mistake for the world”.

“Far-reaching concessions have been made in all areas that were supposed to prevent Iran from obtaining nuclear weapons capability,” Mr Netanyahu said before a meeting with Bert Koenders, the Dutch foreign minister, in Jerusalem. “In addition, Iran will receive hundreds of billions of dollars with which it can fuel its terror machine and its expansion and aggression throughout the Middle East and across the globe.”

Mr Netanyahu also hinted that Israel was holding on to the option of a military strike if Iran were to continue pursuing a nuclear bomb.

“We did commit to preventing Iran from acquiring nuclear weapons and this commitment still stands,” he said, and Israel would refer to details of the deal later on Tuesday.

Israel says its vocal campaigning had the tacit support of Saudi Arabia, Jordan and other Arab states in the region which also fear a nuclear-armed Iran.

Mr Netanyahu’s views were echoed by many rightwing politicians. Danny Danon, Israel’s hardline minister for science, technology and space, said it would “fuel terrorism in the streets of Jerusalem, Washington and London”.

If the agreement holds it will be the first case in which a country subject to chapter seven sanctions by the UN Security Council has exited them through diplomacy rather than war.

Attention will now turn to Washington and Tehran, where hardliners have been trying to scupper the talks for months. In the US, Congress will have two months to scrutinise the agreement and then vote on whether it should be upheld.

In Iran, the majlis, the parliament, will also vote on the text but it does not have a fixed timetable for doing so.